Futsal Clinics and Games for Boys and Girls 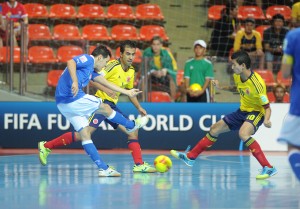 Futsal is the way the world plays indoor soccer. Played on a basketball-size court without walls and a special low bounce ball, which requires players to use their skills rather than the ball’s bounce to propel it, Futsal is a great skill-developer demanding quick reflexes, fast thinking, and pin-point passing.

Ball Control:
With limited space, an out of bounds and constant opponent pressure, improved ball control skills and technique are required.

Mandatory Support:
Without a wall as a crutch, players must make supporting runs when their teammates have the ball.

Continuity of Play:
Action is continuous so players are forced to continue the play instead of stopping and watching.

Fun:
Players enjoy the challenge of playing a fast-paced-fun-skill-oriented game that test their abilities.

* Special Futsal balls will be provided but players must always bring flat shoes, shin guards and water to every class